Withrow Parents! You are simply the best!

The staff appreciation lunch on Thursday, June 11th was a tremendous success and felt very special thanks to all of your generous and delicious contributions of food, drinks and desserts. It was a spread like no other and the staff and teachers were very impressed with the collective culinary skills and felt very appreciated indeed!

We had such a great amount of food that we were able to share a couple of trays of cookies and brownies with the families that were attending kindergarten orientation that same morning. They loved the gesture and it made their day even more special.

We have attached a couple of photos so you can see the impressive spread. 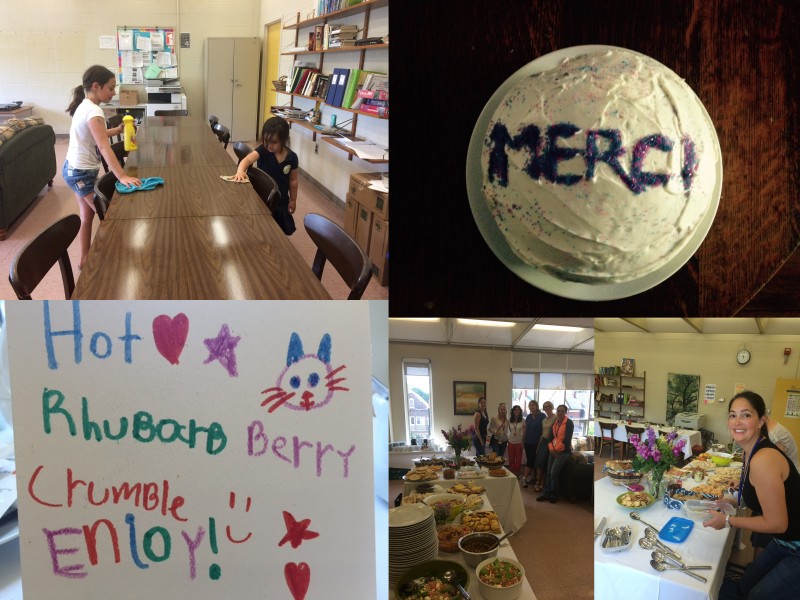 Scenes from the actual event. Note the savvy teachers coming back with tupperware! (Photo credits: Elizabeth Ridley and Josette Chen)

Thank you to the tireless crew – Carolyn, Jennie, Laura, Andrea, Donna, Melody, Emily and Elizabeth – it was a pleasure, as always, working with you.

There are still some containers left on the table on the front lobby. Later this week we will put the remaining ones into storage so if you don’t have a chance to pick it up in the next couple of days you can set up a time with us to let you into the storage room at a later time.

And speaking of containers: many of them were similar and indeed it seems that someone may have made off with the wrong one. If you have a 30-cm diameter, clear plastic tupperware (labelled “Pedersen”), please check that the one you took is indeed the right one. Someone else brought in a similar one but this remaining one is not theirs. Please have a look in your cupboard and let us know if you have it.

We held our last Home & School meeting on June 4 (minutes found here: WHSA – June 4, 2015). Thank you to those that came out. It was a long but important meeting where we discussed the budget allocations for next year, which include major expenses for the field. More on that in a moment—and please read to the bottom—there is important stuff down there!

Elections
Susanne Truelsen has now finished her two years as chair and will serve as advisory chair next year. Josette Chen is joined by Donna Booth as co-chair. Vince Menchella is stepping down as treasurer and is being replaced by Eugenia Christakis. Penelope Hopewell is also stepping down as secretary and we will be voting on a new secretary in September. Thank you all for your great contributions to the Home & School!

School Council
The Ministry of Education has mandated all Ontario schools to have a school council. This is a parent-run body that is in many ways very similar to the Home & School Association model—which we are all familiar with at Withrow. But it’s also different in key ways, particularly related to fundraising. The good news is that we can keep our H&S model, and run it alongside the new council. Rest assured, there won’t twice as many meetings, it is mostly an administrative matter. However, there are certain additional practical implications that we need to inform everybody about. Here are the highlights:

For more details of the above points, continue to read here.

Budget discussion
We have had a tremendous year of fundraising. We asked you to dig deep and you certainly did. When we launched our fundraising efforts with the Annual Giving Campaign, we announced a goal of $60,000. We are very happy to tell you that we exceeded that number. In total we raised $68,800! The best part of this fundraising is that our events (Silent Auction and Fun Fair) were also amazingly fun and brought the community together.

As you may remember the TDSB budget for the field work had estimated that our portion of the next phase of the work, i.e. the paved perimeter around the field, would cost $45,000. That estimate has now been revised by the TDSB and has increased to $58,800. Almost anyone who have taken on major renovation work will be familiar with the concept of ballooning costs, and things the contractor forgot to include in the initial quote!  But we should note that included in the $58.8k is a 15% contingency fund, which will be refunded if not used.

The good news there is that the work is starting very soon—late July is date we have been told. The field will have to be closed off for a few months after installation to let the grass establish properly, but we are very excited that this is finally happening.

We had originally assumed that we could do the ground prep for a new climber and hoped to save some money by using the same crews and equipment that would already be on site this summer. But the TDSB has advised us that this will not be possible. As such, the work on the climber will have to wait until next spring or fall. That should give us plenty of time to pick a good one, though!

It will also give us time to raise more money to make up for the cost increase to the field work. Because, as with the quote for the field, it turns out that the price for the ground prep originally quoted by the TDSB is unrealistically low. We are still in the process of gathering more precise numbers for this but it appears that the ground preparations required for the safe installation will cost a good chunk more than we had initially been told. The general rule of thumb is that if we are thinking of spending x for a climber, then the whole project will in fact cost 2.5x.

All of this to say that despite all of the generous contributions from you all, we are in the unfortunate situation of not being able to afford what we had hoped to.

If we want to install the new climber in the spring of 2016, we will not be able to support all of the other things we usually pay for next year (2016–2017). Arts, science, technology, gardening educator, choir accompanist, etc. We would have to pick and choose.

The parents present at the June 4 meeting all did not feel comfortable making a final decision without having had further opportunity for consultation with a broader group of parents.

As a result, we approved only a limited and partial budget. This doesn’t mean that we are making cuts, it just means that we are postponing a decision until the fall. In the meantime we have ring-fenced $25k which equals what was raised in the annual giving campaign plus an $8k grant from TD Friends of the Environment that is to be spent on trees. You will have received a separate link from us in an email that will take you to a budget page for more details.

Come fall we will regroup and we will need to make some decisions:

Do we want a climber next school year, at the expense of other programs?

Do we want to postpone the climber, save the $17k and continue to fundraise for it for one more year to get the right one and to not impact other programs?

At this time, we will also have done some more research on what sort of climbers are available at different price points.

As you have probably realized by now there won’t a parent social this June. We simply didn’t have the manpower to put it together. Many of you have expressed disappointment  and we get it. We are now postponing and having it in the fall – perhaps in the light of what we discussed above, we could even consider making it another fundraising event? Either way, if you’re interested in helping put something together, please get in touch with us.

Did you know that The Lost and Found removed 17 industrial size bags of lost items, so far, this year. You can help keep this number low by visiting the lost and found often – check it out today! And don’t forget to pick up your coolers if you lent them to us for Fun Fair!

French over the Summer

We are posting this newsletter on behalf of the FSLAC (French as Second Language Advisory Committee): FSLAC Newsletter-graphics-June 2015. There are some fun suggestions of preventing the French slide over the summer. 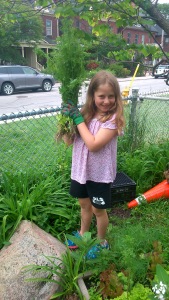 We had another great spring in the Withrow school food garden! With the dry weather in May, somethings were slow to get growing, but with the rain in June, things are growing like crazy! We’ve harvested lots of mustard greens, radishes and radish blossoms, lettuce, and cilantro. It’s always fun to see the students’ excitement when the garden is growing; some of the kindies were really excited to check out the lettuce they had planted from seeds a few weeks earlier, and to get to taste some of the beautiful fresh leaves. A few classes made “garden burritos”, where we harvested and made our own salad and dressing, and then wrapped it in rice paper. Another class had a tea party with herbs from the garden. And a Kindergarten class harvested some of our mountain of cilantro to make a delicious pesto, which they promptly devoured.

Garden Club was well attended by an enthusiastic group ranging from grades 1–6. It’s great to have a range of experiences and ages, and to see a lot of Garden Club members coming back year after year. It’s nice to be able to really discuss what’s going on in the garden with them and to have them help with some decision making.

I’m also happy to say that thanks to an increase in funding from the parent council, I’ll be able to offer more programming next year, both in the garden, and about a variety of food and garden-themed topics. One thing I really look forward to doing with students with the longer programme next year is to have students do some garden mapping and planning during the winter months, to help choose crops for the garden.

To read more about the food garden programme at Withrow and at other school gardens where I work, check out my blog: seedlingstories.wordpress.com

There will be after school programming starting in fall. Please keep an eye on the blog in August. We will send out an email reminder when the schedule is up.

We are posting this on behalf of the Red Door Shelter:

We have made exciting progress on the project to save the Red Door Shelter. Thanks to the thousands of people who signed our petition last year and overwhelming community support, we were able to secure the future of the Red Door Shelter. The plan for the new Red Door Shelter was unanimously approved by City Council on May 5th. Now we can also build it a brand new home. A space has been offered, as part of a condo development at Queen St East and Logan Ave. The new space, with room for 94 beds, vastly improves on the old one because families will no longer have to share bedrooms.

If you have any questions please email us at rebuildthereddoor@reddoorshelter.ca

If you would like to help with some canvassing this weekend, please contact the Committee Co-chair, Gerry Brown at gerrybrown@bell.net